I just finished my smallest build yet, a custom square carbon fiber tube based quad to fit 3 inch props, coming in at 125mm from motor to motor diagonally.

This quad was built with the aim to fly FPV indoors (for the uninitiated that’s First Person View via an attached camera while wearing video goggles). I wanted to design the quad myself without using any kits or known designs, and I wanted it to be as strong and light-weight as possible. I’m not really sure where exactly the idea to use carbon fiber tubes came from, and in hindsight it is probably fulfilling the strength requirement a little more than necessary! But I’m still really happy with how it has come together, and most importantly how it flies.

I did initially try using cylindrical carbon fiber tubes, but they were awful to work with, and the ones I ordered were not made using woven fabric, but instead a bunch of parallel long fibers which could easily be compressed, and fell apart when drilled. The woven square tubes were much stronger and easier to build with, and I was surprised at how easy it was to cut/file/drill/sand and even carve the carbon fiber. 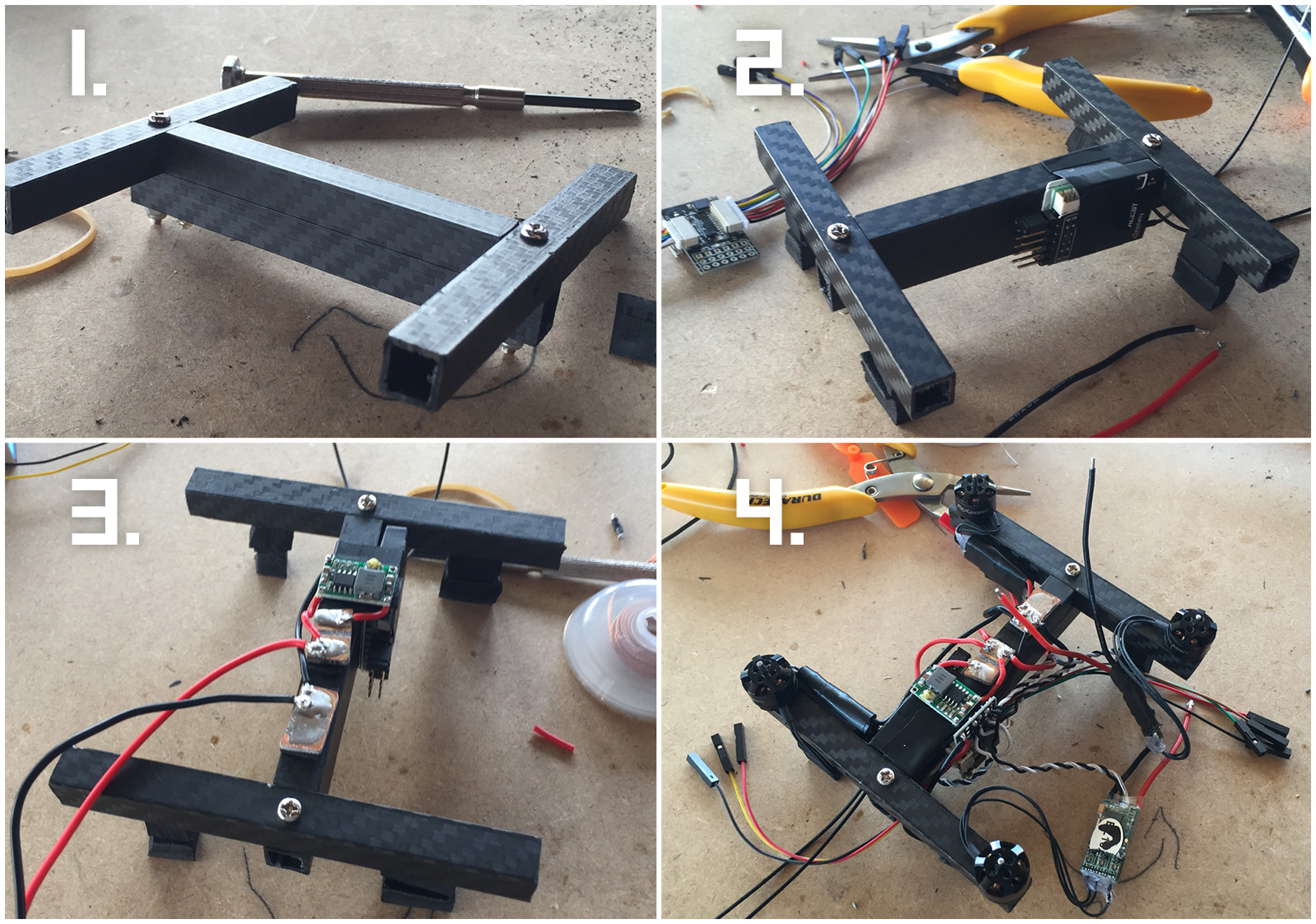 I first flew it without the FPV gear. For line of sight flying it came in at roughly 100 grams including the ~20 gram 2S 300mah battery I’ve been using. That battery offers a couple of minutes of flying with a few flips and rolls. I tried a 1.0ah 3S battery too, but that was really too heavy, and the motors got pretty hot. It still flew surprisingly well with plenty of thrust, but I think a slightly bigger 2S battery will best fit my goals of (relatively safe) indoor FPV.

With the tiny FPV camera and 200mw transmitter added, it weighs in at about 130 grams total including the battery. I don’t have good enough scales to be sure, but I do think I could save quite a bit of weight if I can find a much lighter 5.8ghz video antenna.

The props I’m using didn’t quite fit the motors (1mm prop holes, 1.5mm shaft diameter), so I drilled the props to 1.5mm, and they fit tight enough that there doesn’t seem to be any need to secure them. So far they have held strong, even with the 3S at full throttle, I’m a little worried one might fly off at some point though. I’m yet to try the T-type 3020 props that are designed to go with the motors, I probably should, but they require two screws each, which seems like hard work.

There were two tricky parts to the build. The first was designing a simple frame that would remain rigid and wouldn’t twist. I achieved this thanks to an idea from my Dad where two tubes ran the length, the bottom one screwed to the arms, and the top one cut and then carefully sanded to only just fit between the arms when pushed in with some force and the screws a little loose. After tightening the two screws, that provided more than enough strength without the need for any more fastenings.

The second tricky thing was securing the motors. I had to drill holes in the bottom of the arms that allowed me to poke a screwdriver through to screw in the motors. All the holes were hand drilled and were not very accurate, so I ended up getting them a little wrong and having to elongate some of the screw holes. It was all a bit cumbersome, and I didn’t attempt to add locktight, so of course the screws started falling out in the second flight. I’ve since managed to get locktight into most of them, and everything is feeling pretty good.

I’ve attached a single ws2812b LED to the rear for orientation, to indicate the current flight mode and as a low battery warning, I couldn’t get a buzzer to work with the mini naze for some reason, and google tells me I’m not alone there. I’ll probably use an OSD (On Screen Display) chip for battery voltage monitoring in FPV, as the LED light isn’t much good for that.

I’ve only flown it once so far with the FPV gear, and it was a little hard to control, mostly because there was quite a breeze, and any gust picks up this thing and throws it. But also the tiny camera has quite a lot of lens distortion which is confusing me a lot. I do think it will work great indoors once I get the hang of flying and can trust myself not to fly at full throttle into the TV.

It was quite a lot more difficult to design and build a quad without using a frame kit or guide like this, especially at this smaller scale, but that was kind of the point! I really enjoyed that process.

And now it’s super fun and stable to fly. I’m using Betaflight 2.1.6 with air mode enabled, and this quad is happily flying inverted at zero throttle just like its bigger siblings.

Excluding shipping, transmitter, and tape/wires/solder etc. that comes to about $160USD, a little more than my last build as it includes the FPV camera/transmitter. I can’t wait to fly this some more, and hope to record and post some flight footage soon! 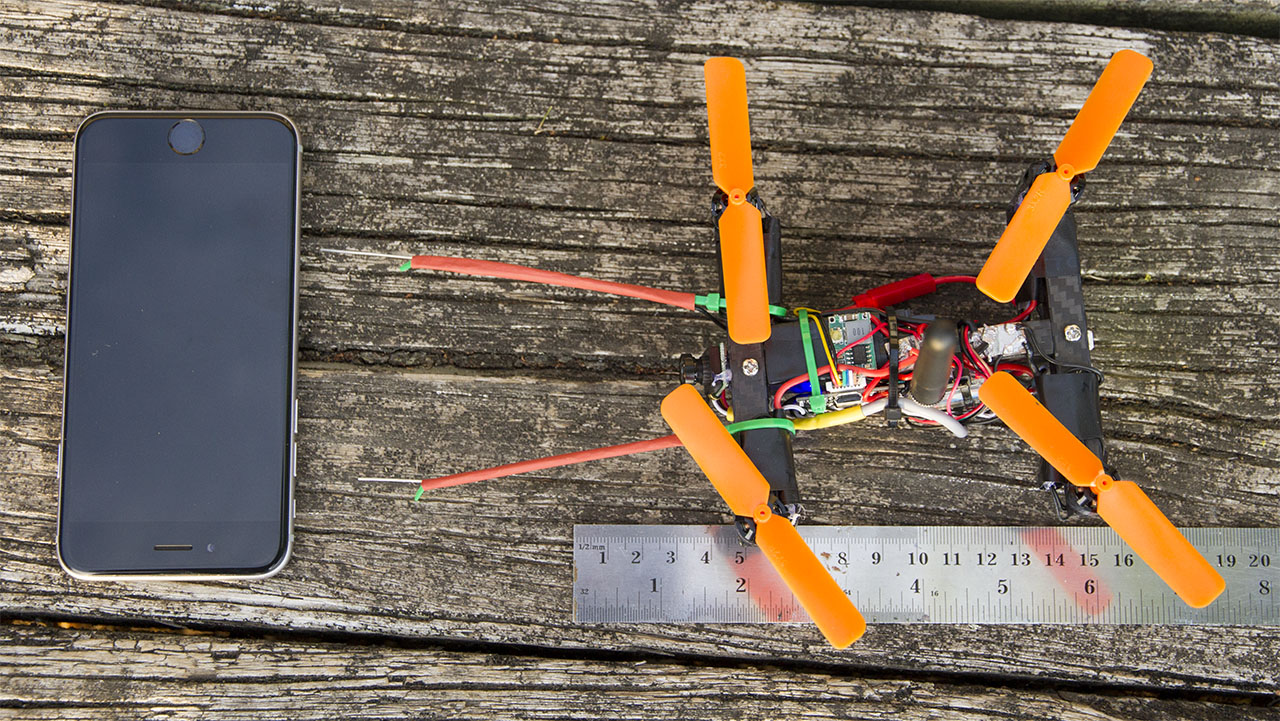