So what good is a shiny new blog without some content!

Recently I picked up a new hobby: building and flying quadcopters. It’s a lot of fun, and part of the reason I started this blog is to write about them. A couple of weeks ago I finished building my first quad: a 250 sized racing miniquad. Now I have ordered the parts for a second, smaller one and I’m also planning on making a third really tiny quad to fly indoors, and am even planning a fourth….. yeah I am totally hooked.

I came to this hobby not knowing how to solder, and knowing only the very basics of how electronics work. I had only briefly flown an iPhone controlled Parrot Drone before. So it’s been quite a learning experience! I’m no expert, but I thought I would share what it took to build my first quad, as a starting point for future posts on how I modify it and what I build from here.

There were loads of extremely helpful videos out there to learn from. Before I even ordered any parts, I just watched a bunch of videos over a couple of weeks. The most useful series was this low cost miniquad tutorial series by RCModelReviews. I like Bruce Simpson’s style, and find his videos extremely easy to learn from. Incidentally he was in the media for trying to build a cruise missile a while back.

I also searched youtube for other miniquad build videos, soldering tips and techniques, part reviews, and pretty much learned everything I needed to get started from just sitting on my ass watching TV.

Once I had a solid understanding of what was required, I started building up parts lists.

I added a bunch of parts to shopping carts at HobbyKing, Banggood and MyRcMart. Probably the trickiest bit was trying to buy all the strange little odds and ends, like spare wires, leads, velcro straps, batteries/chargers, spacers screws and nuts, tapes, glues, cable ties, locktight, solder etc etc etc etc. By some miracle, other than a couple of minor things I picked up at local stores, my first lot of orders actually contained everything I needed to get airborne. I think mostly it came down to taking my time, and also while watching videos I noted down everything that I saw I needed but didn’t have.

This is a list of the major components of my first quad, with links to where I got them:

The research was fun, the ordering was fun, now we get to the fun part, building!

It was actually pretty straight forward. The frame didn’t come with any instructions or anything, but it was relatively obvious where everything was supposed to go. I was glad to have ordered some extra nylon spacers, as the kit didn’t have any. Carbon fiber is conductive, so simply screwing the flight controller onto the frame would have been bad.

I had a few issues trying to figure out how to give the receiver 5v of power in order to bind it with the transmitter. Bruce had used a 2S battery he had lying around, but I didn’t have one. Not really knowing anything about electronics I wanted to find some definitive information from a tutorial and couldn’t. Anyway I eventually found the receiver could take up to 11v quite happily, so I just wired up a connector to a standard 9v battery and powered it that way. Now, a few weeks down the track I have soldered up all sorts of little adapters and things and I could solve this any number of ways.

Soldering was a bit of an issue. I did a bit of practice before hand, but that got boring fast so I kind of just dove in. While flying high up in the air I still worry about some of those early joints! My main problem was actually not having the right gear. I only had a very fine tip, and I didn’t have a power distribution board in this build. So I had to solder some big fat 12AWG wires together sometimes with two or three other wires in the same joint. This really needed a wider tip as I simply couldn’t get everything hot enough for the solder to flow. So I ordered some new tips, and now that I have a couple to choose from (and have had more practice) I’m doing a lot better.

I was very concerned that I had wired the motors up the wrong way - two motors must spin clockwise and two anticlockwise in a specific order which requires specific wiring. I am still waiting on a servo tester so I can test that earlier in the build next time. But I managed to get it right first time luckily.

Configuring the flight controller went pretty smoothly too. I used the BaseFlight software to set things up and that all went well. I’ve since switched to CleanFlight and prefer it, but the tutorials I saw used BaseFlight so it was a better starting point. It’s weird how they are Chrome apps, I didn’t know anyone actually made those. But it seems like a good use case.

With the quad built it was time to take it for a flight!

Flying was way way harder than I thought it would be. I guess the thing is that these miniquads are so responsive and quick, that if you start to lose control, the shit (literally, sometimes) hits the fan fast! My first flight went without incident, I just hovered quite close and careful, and it went great.

So my second flight I was brimming with confidence and took it out in too confined a space too close to vehicles and buildings. Within a few seconds I flew too high and lost my bearings, quickly lost control and came zooming down, crashing at speed into a concrete path. I broke all the props and damaged a motor, but it could have easily been a car windscreen or bedroom window, so I am thankful really. Since that crash I have slowed things down a lot, and am flying with a great deal more care in general.

I’ve had about twenty or so ten minute flights since then, most without incident. I can now control the rudder to do circles and S shapes, but I still get a bit confused and tend to lose control if I face the quad towards me for extended periods. 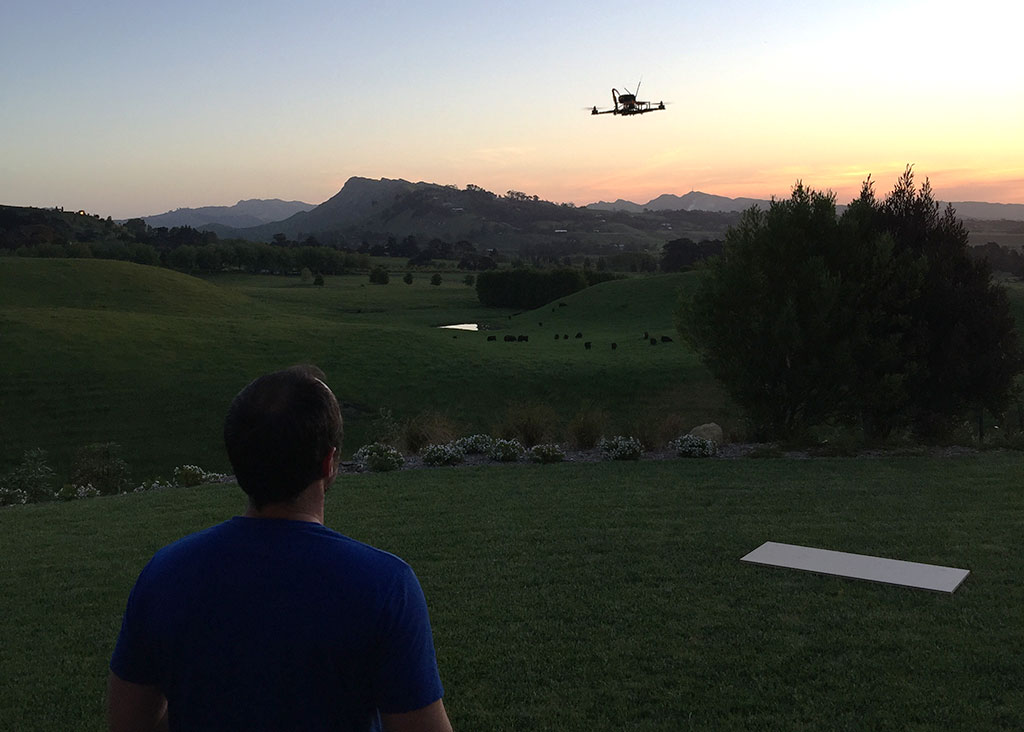 I’ve already modified the quad a bit, switching from BaseFlight to CleanFlight, filming with a GoPro camera, and installing LED strips. I’ve put on programmable LEDs, but I have a nasty flickering thing going on when the motors are throttled up at the moment. Once I get that sorted I might do a post just about the LEDs because they’re cool. I’ve ordered FPV gear which is due to show up in the next week or so, so I’m really looking forward to giving that a try. I’ve also got a 3 axis gimble on the way, to play around with creating better video.

And as I said, I have a couple more quads in the pipeline too. I want to build a micro sized quad with my own frame design made out of carbon fiber tubes and perhaps custom fiberglass. I also ultimately want to build one that I program to sit on the beach and wait until it gets a signal from me surfing out in the water, after which it will fly out, film me riding a wave, then fly back and land on the beach. This isn’t so I can get selfies (dronies) and be a dick all over social media, but so I can better my surfing by analyzing my rides.

And I also want to get a cheap RC boat, pull it apart and turn it into an RC surfer, for when the waves are 1ft. I’m particularly looking forward to that project.

Anyway, so that’s where I’m at, let’s see where it goes from here! 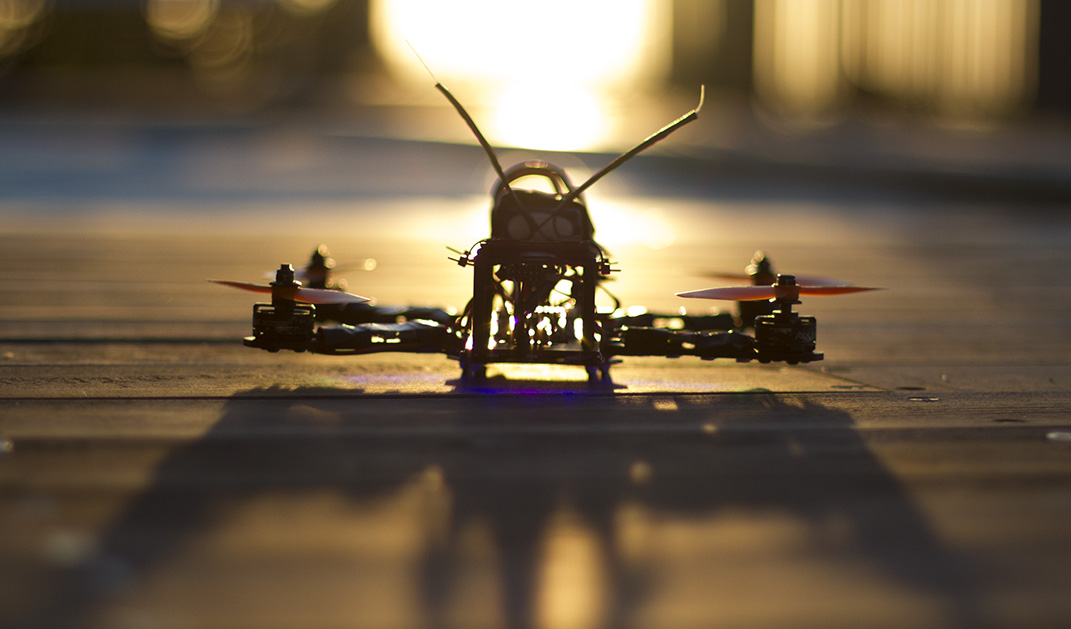